News:
You are at:Home»BASS»Movers & Shakers: Alabama River Fallout
By Sean Ostruszka on May 13, 2013 · BASS, Featured, Majors 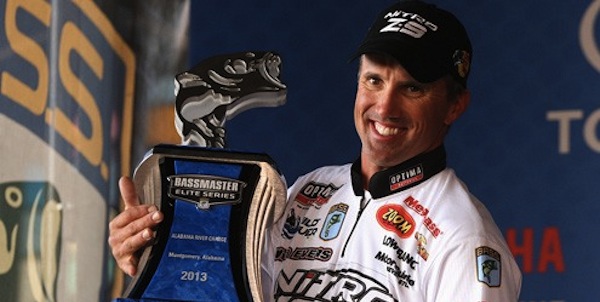 It’s been seven months since there was a change at No. 1 in the Majors Ranking. Well, that streak was broken, as Edwin Evers laid claim to both the BASS Elite Series event on the Alabama River and the No. 1 spot in the same weekend!

How did this happen? Obviously, Evers won at the Alabama River, which on it’s own is impressive. But when you look back two years you realize his margin for error was slim, as last week he dropped a second-place finish at West Point Lake. So in essence, Evers replaced a second-place finish with a first-place finish this weekend. Remember, Bass Rankings doesn’t award bonus points for win or anything; it’s all on average percentage of the field beaten.

At the same time, Kevin VanDam, the former No. 1, finished seventh at that same West Point event, and he basically replaced it with a 32nd this weekend. Hence his average dropping and him slipping to No. 2.

Now, later this week a 2011 event on Lake Murray is going to drop off, and in that event Evers finished in the top 10 and VanDam finished 29th. Will that tournament dropping off be enough to make Evers reign be a short one? You have to check back later this week and see.

As for the rest of the Majors Ranking, there were a few more noteworthy moves courtesy of the Alabama River (and West Point dropping off).

Brent Chapman had been slipping in recent updates, but after his second-place finish over the weekend he jumped seven spots into 14th. Meanwhile, Jason Christie nearly did the exact opposite, falling from 15th to 20th. And how about Skeet Reese? Back-to-back good tournaments and he’s up six more spots to 23rd.

Bill Lowen didn’t have such a banner weekend as he dropped a 12th-place finish and replaced it with a 72nd, killing his average and dropping him 20 spots in the ranking to 45th. Gerald Swindle also headed in the wrong direction, slipping from 31st to 40th.

On a more positive note, though, Aaron Martens broke out of his slump and moved up six spots to 29th, and Michael Iaconelli dropped on of his worst tournaments to climb 10 spots to 38th. John Crews also moved into the top 50 (in 47th) after this weekend.

Check back Tuesday for Minors and Womens updates, and Wednesday for the Data Overload on Lake Eufaula.