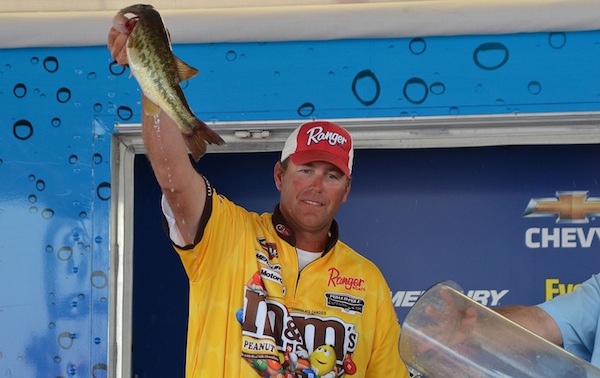 Last week we hinted that while Edwin Evers had taken over the No. 1 spot, his reign might have been short. Turns out, we were right.

When the 2011 BASS event on Lake Murray dropped off — an event Evers finished in the top 10 and Kevin VanDam finished 29th — it took Evers’ top average with it. Now, Evers is sitting in third and KVD is back in first, with Andy Morgan, fresh off an 11th at the FLW Tour event at Eufaula over the weekend, firmly at No. 2.

Quietly, Morgan has been on a tear. He’s finished in the top 15 in seven of his last eight events going back to last year. Plus, he’s about to drop a mediocre Red River event from 2011. So we may be seeing a new No. 1 this week.

As for the rest of the Eufaula fallout, Bryan Thrift’s second-place finish bumped him two spots to fifth, while Jacob Wheeler’s continuing slump dropped him outside the top 10 to 12th. Brent Chapman took his place at No. 10 thanks to a boost from the Murray event dropping.

The teens got a little jumbled, but most of the same anglers are still there except for Jay Yelas, who slipped to 21st. And who moved into the top 20? The one and only Skeet Reese, who now resides in 18th.

There was only one big move in the 20s — Stacy King continuing his fall down the rankings. This week he slipped 10 more spots to 37th. Meanwhile, Ish Monroe jumped up to 25th, and Shinichi Fukae slipped to 29th. However, Matt Arey did climb into the top 30 after his top 25 at Eufaula.

Jeff Michels firmed his grasp on the No. 1 spot in the Minors-Only Ranking over the weekend.

One of the best anglers in the state of California made it three-straight top-10 finishes and five of his last six with a seventh at the FLW EverStart on the California Delta.

But while there was no movement in the top spot, there was plenty behind Michels thanks to that event, the BASS Open on Logan Martin Lake and tournaments dropping off. The top 10 is a jumble, with nearly every angler switching spots and Chris McCall dropping off completely to allow Kent Ware into the top 10.

Phil Marks dropped a 2011 EverStart and skyrocketed from 57th to 12th, and Ken Mah requalified for the ranking after dropping off last week. He now sits in 13th. Greg Gutierrez falling from 15th to 36th was the only other notable move in the top 25.