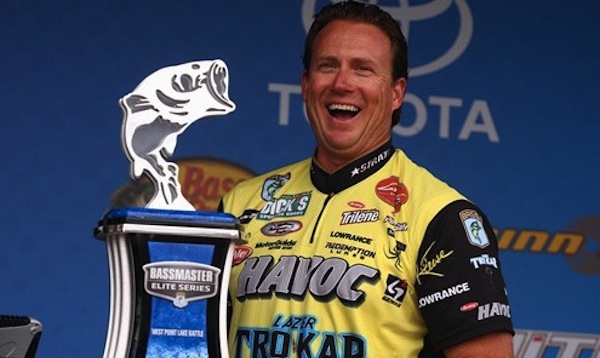 There was a stretch when many considered him the best angler in the world. And there was a more recent stretch when Skeet Reese wasn’t even in the discussion for the top 50 in the Majors Ranking.

Now, Reese is steadily climbing his way back, with his win this weekend at the BASS Elite Series event at West Point Lake giving him quite the boost. His 13th-place finish at Bull Shoals got him back in the top 50 for the first time in nearly two years, and now with his victory, he’s in the top 30, sitting in 29th place.

As for where Reese wants to be, the top 10 was pretty quiet this week, with Todd Faircloth rejoining the club in 10th being the lone movement among the top anglers.

A year after winning the Angler of the Year title, Brent Chapman has not been able to reclaim his 2012 magic, and his 83rd over the weekend dropped him out of the top 20 into 21st. Behind him is Keith Combs, who was one of the few anglers in the top 30 to climb, even if it was just two spots. Meanwhile, Greg Hackney fell five spots to 27th.

He won’t be there for long, but Brandon McMillan can now say he was a top 10 Minors-Only angler.

The Florida pro didn’t fish the lone Minor event this weekend — and FLW EverStart on Pickwick  — but he did drop at EverStart from 2011 to buoy his average enough to get him into the No. 6 spot. The problem is, McMillan now fishes the FLW Tour, so it won’t be long before he fishes enough Major events to nix him from the Minors-Only Ranking.

As for guys who fished the Pickwick event, Mark Tucker was the lone angler in the top 50 who competed. Unfortunately, the Missouri angler finished 49th and fell from 17th to 31st in the rankings.