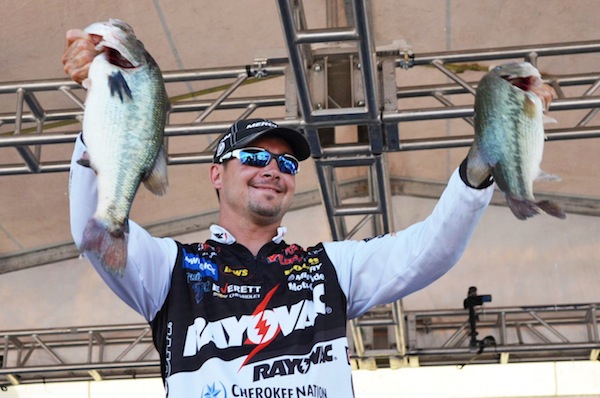 Well, that was … expected.

Considering Jason Christie had already won twice this season, there probably weren’t too many who were shocked to see him win for a third time on his home lake over the weekend during the FLW Tour event on Grand Lake. Christie went wire-to-wire, solidifying what has been an amazing season for him.

So, three wins in one year should push him into the top 10 in the Major Ranking, right? Sorry. While he has three victories and another three top 15s in 2013, he also has a 92nd at the Alabama River, a 70th at West Point Lake and a 69th at the Sabine River. Those are three tournaments that completely kill his average. That being said, the win did help, of course, moving him up eight spots this week to No. 21.

As for the rest of the field, Andy Morgan’s fourth top 10 this year (and ninth top 15 in his last 10 tournaments) only increased his lead over Kevin VanDam. Looks like Morgan is not going anywhere anytime soon.

Meanwhile, Jacob Powroznik leapt up the ranking to No. 6 both because of his 21st at Grand Lake but also because a poor finish at the 2011 FLW Tour event at the Potomac River dropped off. Scott Martin also benefited without that Potomac event, climbing six spots to No. 16.

Spencer Shuffield slipped outside the top 20 to 22nd this week, while Jay Yelas’ top 10 at Grand pushed him up to No. 20. There were plenty more small shifts throughout the 20s, including Aaron Martens climbing into the top 30 (27th), but the biggest one came courtesy of Shinichi Fukae. He had his worst tournament in quite awhile, dropping him from 21st to 35th this week.