News:
You are at:Home»Featured»Hite wins wire to wire at Okeechobee
By Sean Ostruszka on February 10, 2014 · Featured, Majors 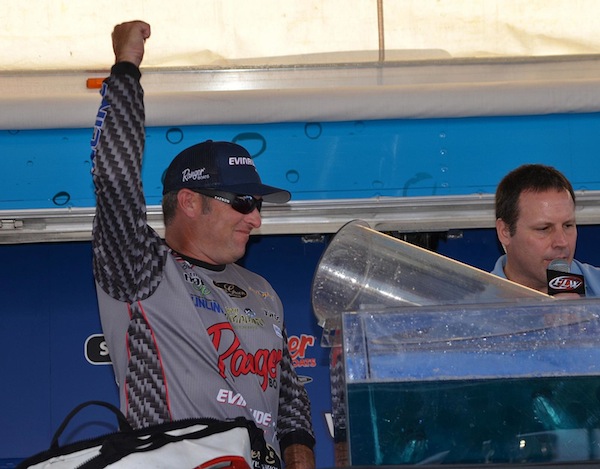 It’s been six years since Brett Hite won an FLW Tour event, when he started off the 2008 season winning at Lake Toho. He then went on to win the next event of the year at the California Delta.

If he wanted to pull off that feat again, he’s already got the first step completed after he won wire-to-wire at Lake Okeechobee in the first Major event of 2014. In the first “busy” weekend of 2014 — one Major, one Minor and three Regionals — Hite stole the show down at the Big O.

The victory also moved him up 15 spots in the Majors Ranking, as he now resides just outside the top 50 in 53rd. The catch is, he might not be there for long, as the 2012 Okeechobee tour event is going to drop off in a couple days. So the Major Ranking is going to do a lot of shuffling this week. That said, we at least wanted to highlight some of the big moves in the top 50.

Cody Meyer finds himself back in the top 10 (now eighth), and right behind him there were a number of FLW pros who shuffled themselves up the ranking a couple spots, most notably Stetson Blaylock and JT Kenney, who are both once again in the top 20 (now 18th and 20th, respectively).

Meanwhile, Troy Morrow, Adrian Aveena and Dan Morehead all slipped, with Aveena  and Morehead falling out of the top 30 to 32nd and 33rd, respectively.

Replacing them in the top 30 was Wesley Strader (24th), Shinichi Fukae (26th) and the mover of the tournament, Larry Nixon, who jumped from 40th to 27th.

Make sure to check out the Minors-Only and Regional rankings after the events this past weekend, too. And check back later this week to see the shake-up after the 2012 even drops off the Major Ranking.