News:
You are at:Home»BASS»Thrift slows down to win at Rayburn
By Sean Ostruszka on March 31, 2014 · BASS, Featured, FLW, Majors 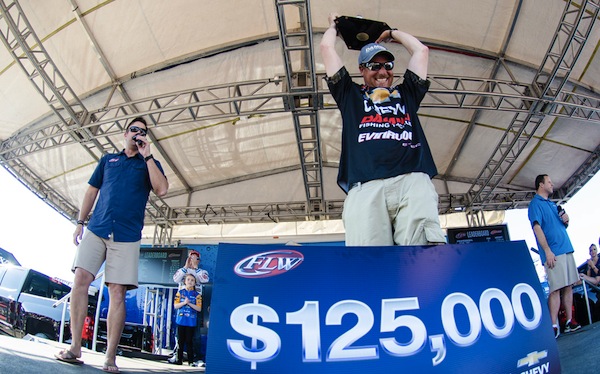 Just when you think you know an angler, he goes and surprises you. Well, at least that’s what Bryan Thrift did over the weekend.

Known for rivaling a NASCAR driver with how fast he covers water, Thrift had to slow down to a crawl to pull off a final-day comeback and win the FLW Tour event on Sam Rayburn. After finishing 107th at Lake Hartwell, the victory was just what Thrift needed to keep his hopes of regaining the No. 1 spot in the Majors Ranking alive. He still resides in second behind Andy Morgan, but the percentage margin is considerably closer.

Meanwhile, we mentioned last week that Kevin VanDam was in jeopardy of dropping out of the top 10 for the first time since Bass Rankings launched. He slipped to seventh after his consecutive-checks streak came to an end at the St. Johns River, and he finished eighth in a 2012 event at Okeechobee that dropped off last week.

Sure enough, losing the 2012 event did hurt, but he’s still clinging to the top 10, in ninth. He’ll have an opportunity to try and gain back what he’s lost at Table Rock this weekend.

Now, Dean Rojas certainly didn’t mind dropping that tournament, as it allowed him to climb 12 places to 22nd. But the big mover in the last week was Greg Hackney. Between losing the 2012 event and making the top 10 at Rayburn he jumped 19 places to 30th in the latest update. And let’s not forget Tom Monsoor, who also rose a dozen places to 28th.