News:
You are at:Home»BASS»McClelland McSticks it to Table Rock
By Sean Ostruszka on April 7, 2014 · BASS, Featured, Majors 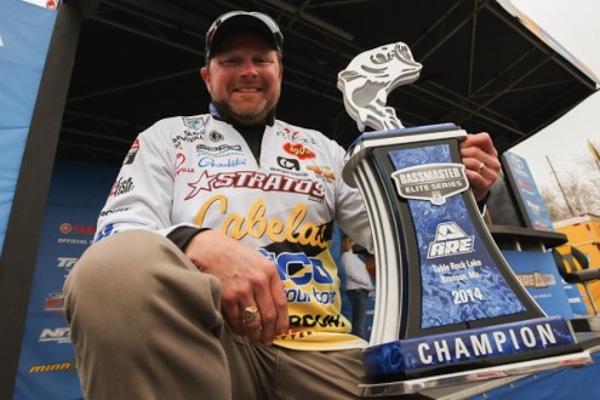 It’s always a sweet thing to win a Major tournament. It gets even sweeter when that win breaks a six-year drought. And when it also comes on your home lake? By a nail-biting 13 ounces? Yeah, it was a good weekend for Mike McClelland.

The man known as “McStick” broke into the Elite Series with four wins in four years, making him one of the rising stars of the sport. Six years without a victory certainly took a little luster off that star, but as you can tell by his ranking, McClelland certainly hasn’t gone quietly into the night. Before his big win over the weekend on Table Rock he was ranked just outside the top 50 in 58th. Of course, he’s back on the rise again after his win, shooting up to 44th in the latest update.

McClelland is not the only Elite Series angler on a resurgence tour in 2014, as Mark Davis has rattled off three-straght top-three finishes to start the season. It also makes four-straight regular-season top-five finishes dating back to last year.

The three-time Angler of the Year is easily leading the AOY race. Not surprisingly, he’s made quite a leap in the last two months in the rankings. Davis started the season in 83rd with a 566.966 average. Now? He’s improved his average to 647.985 and currently sits in 36th.

Ironically, the other big move from the weekend also involved Table Rock. A 2012 FLW Tour event dropped off, allowing Mark Rose to jump into the top 10, in sixth.