News:
You are at:Home»Featured»Combs cracks century mark for third TTBC win
By Sean Ostruszka on May 12, 2014 · Featured, Majors, PAA 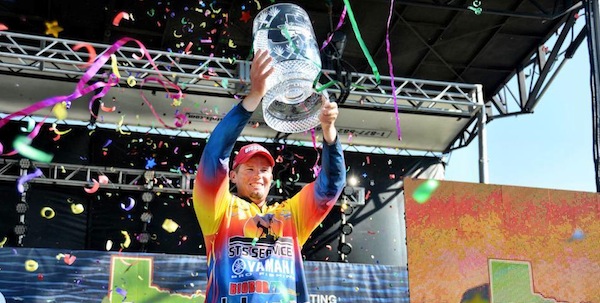 It might be time to rename the Toyota Texas Bass Classic the “Keith Combs Charity Tournament.”

Heading into last weekend, Combs had already won two TTBCs and finished third and fourth the other two times he had competed. A change of venues from Lake Conroe to Lake Fork did little to change the outcome, as Combs cracked the century mark for the second time in his career – he broke 100 pounds when he won the 2013 Elite Series event on Lake Falcon – to lay claim to his third TTBC title in four years.

Needless to say, Combs is the best angler in the state of Texas (even our State rankings say so).

As for our Majors Ranking, Combs’ victory brings him once again inside the top 20, as he climbed nine spots to 20th.

With such a stacked field, Combs wasn’t the only mover. Todd Faircloth now finds himself in the top 5, Stetson Blaylock – who also cracked the century mark at Fork – climbed five spots to 15th, and Justin Lucas also cracks the top 20.

And that was just the top 20. Make sure to check out the rest of the Majors Ranking to see where your favorite anglers rank.