News:
You are at:Home»BASS»Martens makes it two at Chesapeake
By Sean Ostruszka on August 17, 2015 · BASS, Featured, Majors 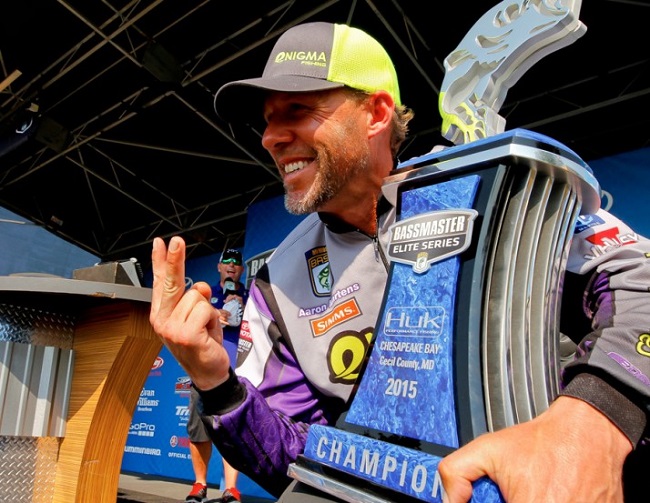 Aaron Martens is on fire.

Not only did Martens win his second Elite Series event of the season (and eighth overall) on the Chesapeake Bay, he all but locked up the Angler of the Year title barring a catastrophic finish at Lake St. Clair.

Of course, that doesn’t even tell the whole story. Get this: Of the nine Major-level events he’s fished this year, he’s finish outside of the top 30 once and has finished in the top 15 seven times.

That said, he’s still only the No. 9-ranked angler in our one-year Pro Ranking and No. 6 in our two-year ranking. Both very impressive, but a couple key tournaments are holding him back.

As for the rest of the two-year ranking, Marten’s win caused a slight shuffle in the top 10, while Dean Rojas (now 11th) and Justin Lucas (now ninth) switched places. The biggest noteworthy moves happened in the 40s – Michael Iaconelli slipped from 32nd to 44th after his near last-place finish over the weekend. That now puts him two places behind Bill Lowen, who jumped from 57th to 42nd after his runner-up finish.