News:
You are at:Home»Featured»Fisher Grinds out Costa Championship
By Sean Ostruszka on November 7, 2016 · Featured, FLW, Minors 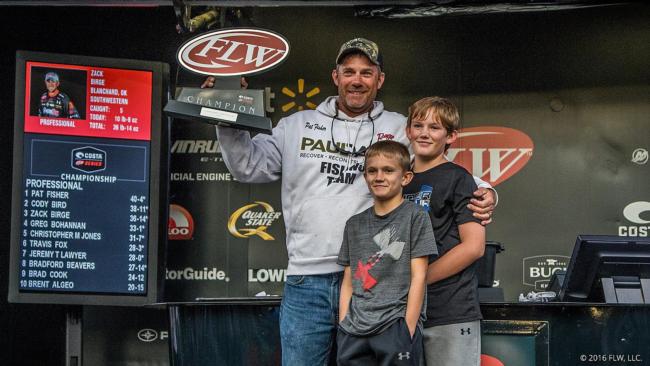 Pat Fisher was a professional angler awhile back. Then he wasn’t, and technically he’s still not. He hasn’t lost his ability to catch fish, though.

Fisher has been doing well at the local levels the past few seasons, but a new sponsor helped him step back up to the Minors. The result was a win at the FLW Costa Championship on Table Rock this past weekend.

In punching his ticket to the 2017 Forrest Wood Cup, Fisher bested some of the best locals (Zack Birge, Greg Bohannan, Travis Fox) and even the No. 1-ranked angler, Bryan Thrift. Beating Thirft may have had a bit of sweet revenge, as it was Thrift who came from behind to take the victory from Fisher at the Santee Cooper Costa earlier this season. As for his ranking, Fisher doesn’t qualify for the Two-Year Ranking, obviously, but his first year back in the Minors finishes with him ranked eighth overall in the One-Year Minors-Only Rankings.

Now how about those Major-level anglers who fished the Championship? Bohannan is ranked 10th in the Minors after his top 10 at Table Rock. Birge is 20th, Fox is 70th and Thrift is 16th.