News:
You are at:Home»Featured»Back-to-Back for Rose; Johnston New No. 1
By Sean Ostruszka on February 20, 2017 · Featured, FLW, Majors 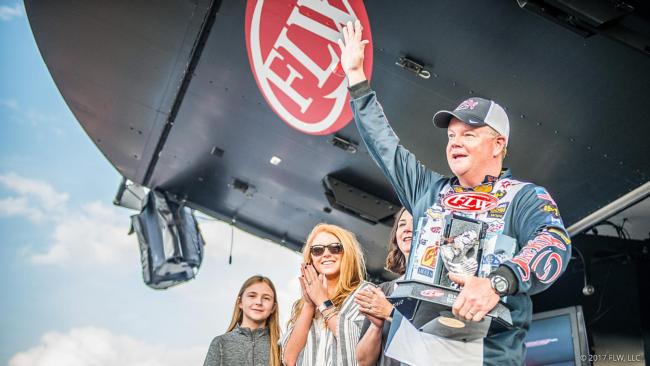 A couple weeks ago we were talking about how Mark Rose is the best angler on TVA waters. Now, he’s putting himself in the conversation as the best in the sport.

Rose became the first back-to-back winner in the 20-year history of the FLW Tour after his win this weekend on Lake Travis (he won the FLW Tour opener on Guntersville a couple weeks back), and that’s hardly where the remarkable ends. Not only did he finish first in both tournaments, but he held off Bryan Thrift – the former No. 1-ranked angler in the sport (more on that later) – in both events, relegating him to second in both events by a combined total of less than 2 pounds. This also marked Rose’s first Major victory away from a Tennessee River fishery.

Needless to say, Rose is having himself quite the 2017 season FLW Tour, and he’s only two tournaments in.

So, where does he rank? Well despite holding off one of the best anglers twice, Rose still has some lack-luster tournaments on his two-year record. So the win jumped him up to 40th in our two-year Majors Ranking after previously being in 63rd.  That said, we mentioned before how he’d been on a hot streak. Clearly that’s continued, as he’s now ranked No. 4 in our one-year Majors Ranking with an 865.375 average.

Now let’s circle back to Thrift. Obviously, he’s one of the best in the sport, as he went into the Lake Travis event ranked No. 1. And also obviously, a second-place finish in that event only helped his average. Yet, if you look at our two-year Majors Ranking, he’s now ranked No. 2, behind Chris Johnston. What gives, right?

We’ll be honest, we were just as surprised as you. So we did some digging.

Johnston just fished his 10th Major tournament, qualifying him for our two-year Major Ranking. And it so happens, his average the last two years is better than Thrift’s (845.801 to 831.760). Hence, Johnston debuted at No. 1. Now, we will quantify this a bit, though. Johnston’s average is across 10 events in two years. In that same time frame, Thrift has fished 19 Major-level events. It’s obviously harder to keep such a high average over more events, which speaks volumes to how well Thrift has been fishing. In fact, Thrift is easily the No. 1-ranked angler in our one-year Majors Ranking, with a staggering 915.319 average in the last calendar year.

So while Johnston may hold the crown as the best the last two years, Thrift is clearly fishing better than anyone else right now. Hence why we have one- and two-year rankings!