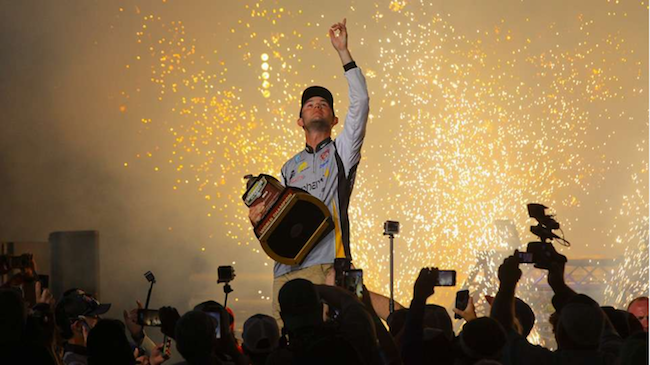 When we first debuted our College Rankings, an Auburn University angler by the name of Jordan Lee held the No. 1 spot. Now, he’s on top of his sport.

Despite a number of obstacles – from poor conditions to an awful day one to his lower unit going out on the final day – the 25-year-old Lee showed a savvy beyond his years as he milked one point on day three for the biggest stringer of the Bassmaster Classic. The result: an improbable comeback victory and the coveted Classic trophy.

You can read all about Lee’s championship run here, but he was in 37th after day one, having brought only three fish to the scales. He was 15th after day two thanks to a 21-pound bag, but again, no limit (only had four fish). When he finally caught a limit on day three, it nearly weighed as much as his first two days’ catches combined.

As for his ranking, Lee has consistently hovered around the top 10 after debuting at No. 12 last year. He was even ranked No. 2 at one point last fall. After a minor slip, he’s back in the top five, firmly seated in the fifth spot.

Meanwhile, a notable fall was Keith Combs, who had been in the top three for the last year. However, despite being the favorite at Lake Conroe, he finished 35th and has fallen to 10th in the rankings.

Ahead of him, Bobby Lane and Ott Defoe now hold down the No. 3 and 4 sports, respectively, as both once again finished in the top 10. Then there is Steve Kennedy, whose runner-up finish bumped him up to 23rd, overall, while Brent Ehrler continues to march back toward the top. The former No. 1-ranked angler is now ranked 18th. James Elam is ahead of both of them, though, as he’s quietly risen to 13th in the rankings.