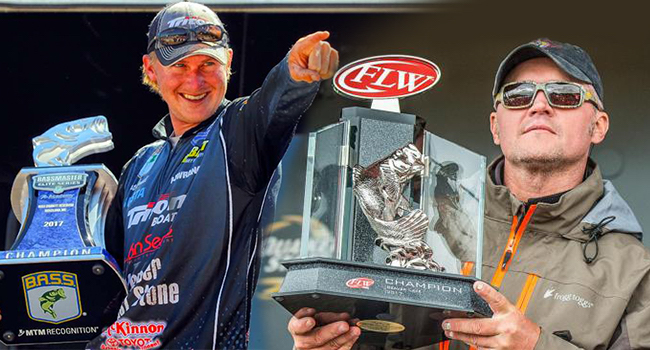 Usually it’s veterans who find ways to grind out victories under tough conditions (and this past weekend was the definition of “tough conditions”). Yet, it was two rookies who found themselves handling Mother Nature the best and holding trophies.

Needless to say, this past week’s weather was downright awful, and it obviously affected both the FLW Tour event on Beaver Lake and BASS Elite Series event on Ross Barnett. The final day of the Elite Series event actually had to be moved from Sunday to Monday due to weather, while the FLW event saw the lake rise 9 feet during the event, along with massive logjams, 9 inches of rain on Saturday, lightning, muddy water, and plenty more.

Despite all that, rookies Dustin Connell (Elite Series) and Johnny McCombs (FLW Tour) managed to hold off some of the biggest names in the sport to claim their victories. Each is an interesting story in his own rite, with Connell being a former college angler who has worked his way up to the Elites similarly to Matt and Jordan Lee. Meanwhile, McCombs is the “most naturally talented fisherman” Andy Morgan has ever shared a boat with, which is saying something from a former No. 1-ranked angler. Unfortunately, drugs derailed McCombs’ career the last 12 years, but now clean, he’s beginning to prove Morgan’s words true.

Needless to say, since both Connell and McCombs are rookies, neither qualifies for the Majors Ranking. However, that doesn’t mean there was something noteworthy, mainly Bryan Thrift continuing to expand his lead as the best in the sport.

Thrift made yet another top 10, meaning he hasn’t finished worse than 12th in his last 10 Major events, and that doesn’t include his 24th, 16th and second-place finishes in Costa tournaments during this stretch. He has a 935.699 average in all tournaments over the last calendar year, and his 842.093 average in Majors is almost 30 points higher than second place Jacob Wheeler.

Meanwhile, the top 20 continues to be dominated by Elite Series anglers, with only Thrift, Morgan (6th), Mark Rose (15th) and Scott Canterbury (19th) making it in. Though it’s worth nothing seven other Elite Series pros in the top 20 were FLW Tour pros in recent years. Also worth noting: Former No. 1-ranked angler Kevin VanDam has battled his way back from an near triple-digit ranking to now sit in 34th after his top 10 at Ross Barnett.