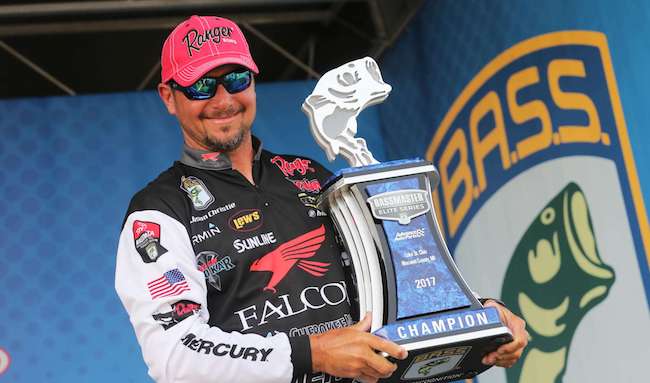 Jason Christie seems to have two strengths. One makes sense. The other, not so much.

It’s well known Christie is one of the best anglers in the panhandle area of the country. He has 10 victories in the last decade of major and minor competition, and seven of them have come in Arkansas, Oklahoma, Missouri and Texas (along with eight more top fives). One came at South Carolina’s Lake Hartwell, when flooding turned one river backwater into something similar to what one would expect in Oklahoma. The other two, including this past weekend’s Elite Series victory, have come on Lake St. Clair – a lake that couldn’t be more different from those in the panhandle. Yet, he also has another top 10 there in 2015.

Whatever the reason, Christie continues to solidify himself as a top-10 talent in the sport, with his victory bumping him up to No. 7 in our Majors Ranking. That top 10 at St. Clair from 2015 is set to drop off this week, which will hurt his average. However, he’s going to drop off an awful Sturgeon bay finish in mid-September (his fourth-worst finish in the last two years). So if he has a strong finish at Lake Mille Lacs, he’ll climb into the top five.

Speaking of climbing into the top five, Michael Neal did exactly that, jumping to third despite not fishing a tournament. How? He dropped his second-worst tournament – the 2015 Forrest Wood Cup – in the last 24 months. His current average is 826.358, but that’s weighed down heavily by his Beaver Lake finish earlier this year. Get rid of that one tournament, and his average is 862.380, which would be good enough for No. 2 in our ranking.

Another noteworthy move after this weekend was James Elam, who slipped from 10th to 15th after his stumble up north. Seth Feider also bumped up a few places to 16th. He won the last time the Elite Series went to Mille Lacs and will be a strong favorite again. Watch for him to try and crack to the top 10 by the end of next month.