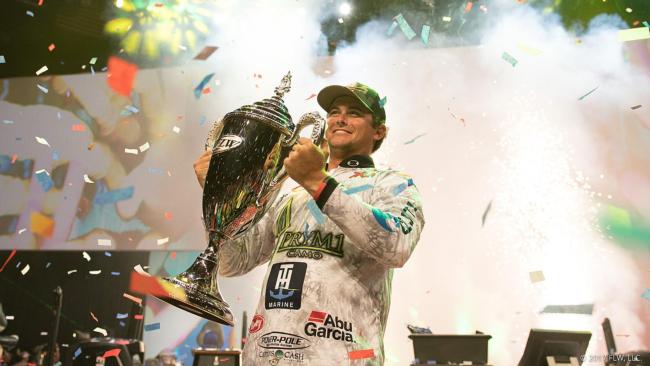 When he signed up, Justin Atkins admits he didn’t have enough money to fish the full 2017 FLW Tour season. He doesn’t have to worry about that, now, for next season or many after.

The 27-year-old FLW Tour rookie outlasted his friend and roommate, Brandon Cobb, and a late charge from Travis Fox to cap off his first pro season hoisting a $300,000 check and the chrome Forrest Wood Cup trophy. On a side note, Atkins’ victory means the collective age of the two current world champions for each tour is just 52 – Jordan Lee won the Bassmaster Classic earlier this year at the ripe old age of 25.

If you didn’t know who Atkins was prior to this weekend, that might not be too surprising. The former college angler for Mississippi State had never won a tournament at the regional, minor or major level. However, in the past year he finished third in the T-H Marine BFL All-American and runner-up in the FLW Tour Rookie of the Year race. So, needless to say, his talent was starting to shine through even before his triumph at Lake Murray.

As for his ranking, as we said, he was a rookie this year. Thus, he doesn’t have enough tournaments under his belt to qualify for the two-year Majors Ranking. That said, he has qualified for the one-year Majors Ranking, and his victory has him now sitting as the 44th best angler in the sport (and 11th-best FLW Tour pro) over the last year.

Meanwhile, Cobb can at least still boast he out ranks his buddy, as he’s 26th in the one-year ranking (6th best FLW Tour pro), and 49th in the official two-year Majors Ranking. As for Fox, the former FLW Tour pro no longer fishes major events (he qualified for the Cup via the Costa division), so he doesn’t qualify for either major ranking.

In looking at the rest of the ranking after the Cup, Bryan Thrift continues to do what he does, which is make top 10s. He did so again at Murray and gained a little bit of ground on Jacob Wheeler for the No., 1 spot. For now, he’ll settle for No.2, though he is No. 1 in the one-year ranking, meaning he’s the best angler in our sport over the last year.