News:
You are at:Home»Featured»Hallman Adapts to Win at Lanier
By Sean Ostruszka on March 12, 2018 · Featured, FLW, Majors 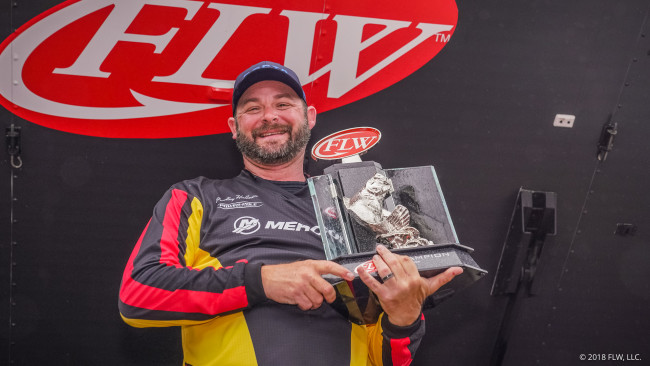 Bradley Hallman called it the best tournament of his career, and for good reason.

Not only did the Norman, Okla., pro catch a personal best (and jaw-dropping) 23-pound, 11-ounce bag of spotted bass to open the FLW Tour event on Lake Lanier, but he then had to scrap the pattern he used to catch them (along with two other patterns the next two days) to claim his second major victory.

Here’s a look at how he adapted every day:

Day 1:  Ran more than 45 points with a Megabass Vision 110 +1 jerkbait and a Keitech Swing Impact Fat swimbait on a ½-ounce head on the lower end.

Day 2: Fished for “fence pandas” – big spotted bass that suspend under the floating walls outside marinas – with the swimbait on the lower end.

Day 3: Skipped docks and walkways inside marinas with a Zoom Trick Worm on shakeyhead on the lower end.

Day 4: Ditched the clear water and stayed in the stained rivers, throwing a spinnerbait around docks and shallow vegetation.

Adjusting a pattern mid-tournament one time is hard enough, but three? And making the right decision every time? Pretty impressive stuff.

There’s no doubting Hallman’s talent, but his track record shows an all-or-nothing angler, with the plot line of his finishes looking almost like an EKG readout. So while he’s a threat to win just about any tournament, he’s also a threat to finish near the bottom. That puts him right about in the middle, ranked 165th in our Majors Ranking.

Meanwhile, fellow Oklahoman and runner-up Zack Birge is trending in the right direction. He’s currently ranked 145th, but many of his poor 2016 finishes are due to drop off in the coming months. Plus, he’s ranked 69th in our One-Year Major Ranking.

There was some significant movement in the top 10 after this event, as well. Out are Michael Neal (now 12th) and Andy Morgan, who’s disastrous 2018 continues as the former No. 1 has slid to 19th. Taking one of their places in Cody Meyer, who is all the way up to ninth, and he’s actually fifth in our one-year ranking, two spots behind fellow tour pro Anthony Gagliardi.