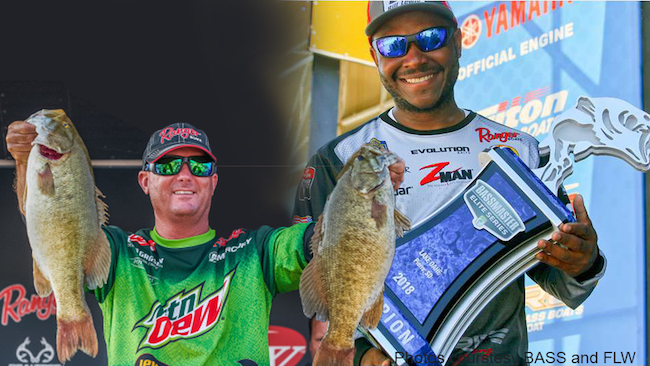 A good smallmouth bite is some of the most fun any angler can have on the water, and the anglers on the Elite Series and FLW Tour sure had a lot of fun over the weekend. Though, it’s safe to say the tour pros had a time they’ll never forget.

We’ll start in South Dakota, where Mark Daniels Jr. got his first major victory on the first-ever major tournament on Lake Oahe. While plenty of pros struggled mightily, MDJ pulled out the victory thanks to a Ned rig with a Z-Man Finesse TRD and drop-shotting a Z-Man Finesse WormZ.

Yet, Lake St. Clair was the big winner of the weekend. The fishery showed out in ridiculous fashion, setting the record for most cumulative weight over the first two days of a tour event. In the ultimate slugfest, no one slugged harder than Chad Grigsby. The Minnesota pro got it done thanks to a Venom Lures Salt Series Tube, but he did his heaviest lifting with a Duo Realis Spinbait 80.

Now, let’s look at the rankings.

Despite having two events, nothing really changed in the top five, but look a couple spots more and suddenly you’ll see Daniels’ name again. His victory has him all the way to ninth.

Dropping out were pros like James Elam and Mark Rose, who still managed to hang on and win his first FLW Angler of the Year crown over the weekend.

As for Grigsby, he’ll be shaking off a rough past two seasons for awhile, but the victory certainly will get him back headed in the right direction, as he’s now ranked 127th.