News:
You are at:Home»BASS»Rojas, Cobb, Cox All Victorious
By Sean Ostruszka on May 7, 2019 · BASS, Featured, FLW, Majors 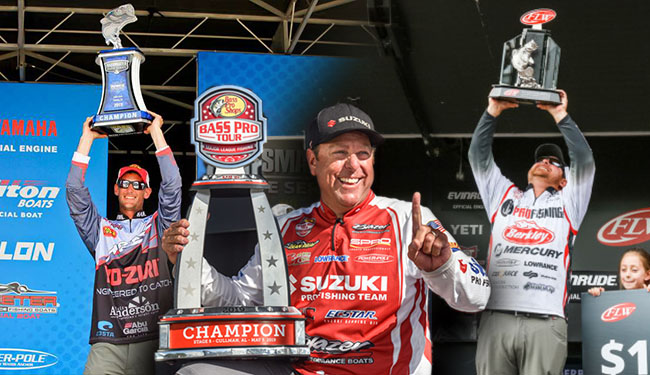 Just a few weeks ago we got a triple-dose of top-level competition. So why not do it again?

All three major tours held tournaments this past weekend. The Bass Pro Tour headed to Lewis Smith Lake, where Dean Rojas took home his first major victory in 8 years. The BASS Elite Series went to Lake Fork for the Toyota Texas Fest, where Brandon Cobb got his second victory of the year by cracking more than 114 pounds. And last but not least, the FLW Tour hit a transitioning Lake Chickamauga, with John Cox pulling out the victory in the final minutes.

Rojas ran away with the event early in the championship round by capitalizing on a shad spawn with a crankbait, swimbait, frog and swim jig. Meanwhile, Cobb joined the century club (as did runner-up Garrett Paquette) thanks to tossing a Duel Hardcore Minnow Flat 110 SP jerkbait in ghost pro blue on shallow shell beds where shad were spawning. Meanwhile, Cox did what he does best, running around up shallow and doing a little sight-fishing with a wacky-rigged Berkley Powerbait MaxScent The General.

Now, despite all this action, something impressive happened: None of the top three anglers changed! Jacob Wheeler, Edwin Evers and Brandon Palaniuk continue to pace the sport as the top anglers.

Of course, that can end at any time, as Bryan Thrift has shown. The No. 1-ranked angler for the majority of the last couple seasons has actually fallen outside the top 10 for the first time … maybe ever. He’s now in 11th.

That puts Thrift one spot ahead of Cobb, who has finally broken through since switching from the FLW Tour to the Elite Series. He now has won two of the last three Elite Series events, but sandwiched between is a lackluster finish at Winyah Bay that’s weighing down his average.

As for Cox, he’s long been one of the best, as he’s a former No. 1-ranked pro. In fact, he’s currently ranked No. 2 in our one-year ranking, which should tell you just how well he’s been fishing as of late. Overall, he’s now ranked 29th as he continues to distance himself from a mediocre 2017.

Rojas has actually been slumping the last year, with a 557.397 average across all events and 753.445 in major events. That said, this victory helped bump him up to being ranked 32nd overall.