News:
You are at:Home»BASS»Hometown hero
By Sean Ostruszka on February 23, 2015 · BASS, Featured, Majors 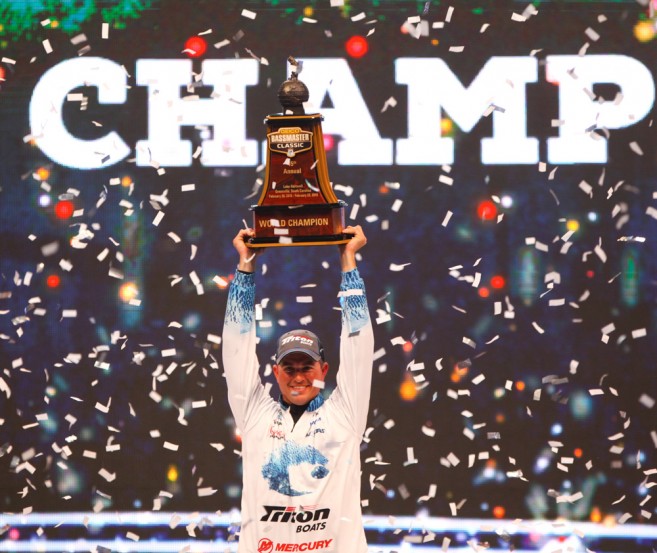 Few anglers are able to manage the pressure and win on their home waters. Casey Ashley has definitively proven he’s one of those special few.

Having grown up fishing Lake Hartwell, the 31-year-old was the clear favorite heading into the 45th Bassmaster Classic. But it wasn’t just that he was a local. Before the tournament we ran the numbers on his averages at Hartwell and other Savannah River impoundments. He had the fourth best average at Hartwell (836.735) and easily the best average on the Savannah River (910.112).

Obviously, those averages received a boost when he proved the numbers right once again by taking home the crown – his first Classic title.

Prior to the Classic, Ashley was ranked 23rd in our Majors Ranking. But the biggest victory of his career and second straight Major victory at Hartwell has bumped him up to 17th. Not only that, but the win bumped him into the top 10 in the one-year ranking, as he’s been the eighth-best angler in the last 12 months.

Behind Ashley, Bobby Lane was one of many that proved our pre-Classic predictions correct (our ranking numbers revealed five of the top 10 anglers and seven of the top 15).  Lane’s second-place finish jumped him from 31st to 24th. Meanwhile, Takahiro Omori’s close bid for a second Classic title bumped him from 102nd to 86th.

Fourth-place finisher Dean Rojas nearly mirrored Lane, bumping up from 34th to 26th, while Jacob Powroznik’s top-five finish couldn’t help him near as much. You see, he’s already in the top five of the Majors Ranking, though his impressive finish did help him jump Brent Ehrler for the No. 4 spot.

On the flip side, Shinichi Fukae was ranked in the top 20 going into the Classic, but his 42nd-place finish dropped him down to 27th.