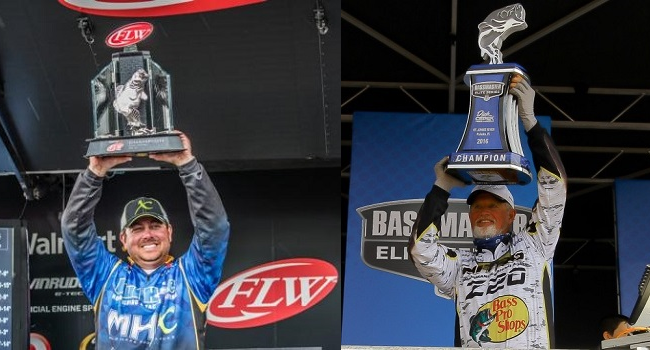 One tournament can cause a ripple in our rankings. Two? That can be a surging wave, sending anglers up and down with strength. That’s what we saw this weekend, and the top 10, alone, shows what can happen when all Major anglers go at it.

After the BASS Elite Series on the St. Johns River and FLW Tour on Lake Hartwell only two top-10 anglers remain in their same places as before the tournaments – Scott Martin is still ranked No. 1 and Keith Combs is hanging tight at No. 5. One angler dropped out (Casey Ashley, now 15th), allowing Dean Rojas to move in at No. 10. The rest have all been shuffled around.

One of those shuffled higher was John Cox after his victory at Hartwell. After nearly being out of the sport a few years back, he’s now leading the Angler of the Year standings for FLW and is ranked No. 4 in our rankings.

The other victor, Rick Clunn, made an even larger leap. One of the legends in the sport, Clunn hasn’t cracked the top 100 in our rankings in a long time. That said, he’s as close as he’s been after finding some of his old magic over the weekend. He moved up 14 places to 117th.

Honestly, there are far too many changes to this week’s rankings to recap them all. We will note Jordan Lee made his debut at No. 12, but to see all the rest of the changes, you’ll have to log-in and see how everything shook out.

Also, don’t forget to check out the College Rankings after the FLW College Fishing National Championship.