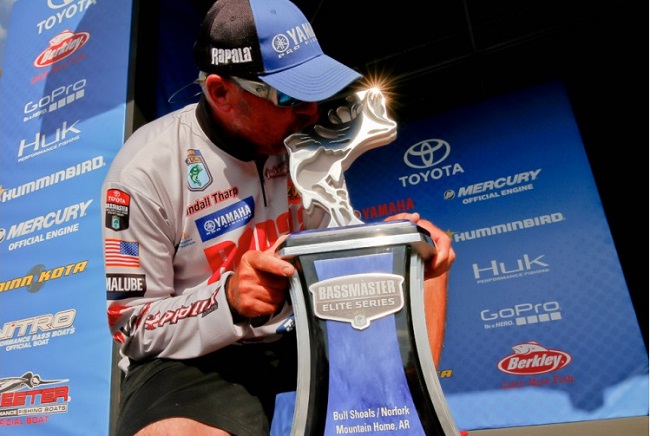 The Bassmaster Elite at Bull Shoals/Norfork event took pros on two lakes across four days, which certainly complicated how most anglers prepared. Randall Tharp did the opposite; simplifying things by looking for one pattern that would work on both lakes. Heck, he really only used one lure – a Randall Tharp Signature series 4×4 jig.

The result was Tharp’s first Elite Series victory, making him in rare company as one of the few pros who has won both Elite Series and FLW Tour events (and he also has a Forrest Wood Cup, meaning he only needs a Bassmaster Classic victory for the career grand slam).

Tharp has proven once again he shouldn’t be forgotten, but after a poor 2015, his ranking certainly had suffered. Once a top-20 angler, he’d fallen close to 100. Now, he’s climbed his way to 67th after his victory. Of course, that won’t stay for long, as he’ll be losing a third place from 2014 in early May.

Another angler climbing his way up the ranking is Skeet Reese, and his second place over the weekend continued his ascension. Reese swooned a few years back, falling out of the top 50, but he’s now back in the top 10, sitting in eighth.

Meanwhile, Chris Zaldain has quietly been one of the most consistent pros the last two years. He was already ranked in the top 20, and his third-place finish bumped him up to 16th.