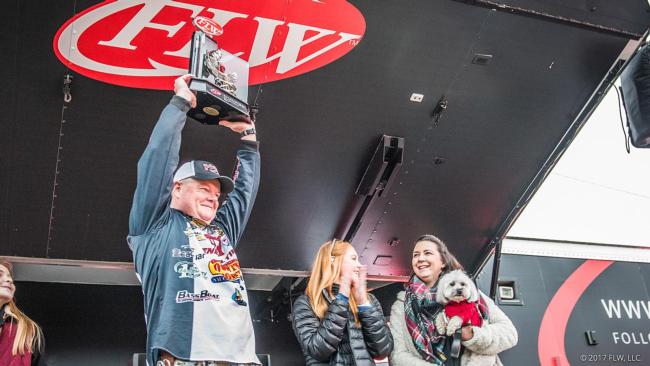 Quick, what pro has the most wins on the Tennessee River lakes? First thought would probably be Kevin VanDam, and that’s a good guess. He does have the best average on that late in Major-level events (852.214) and three wins.

But if you’re going for total wins, that title goes to Mark Rose. The West Branch, Ark., pro has now six Major and Minor-level victories on TVA waters after his win at the FLW Tour opener on Guntersville this weekend (and he has a seventh win if you include Regional events).

What makes this one different from the others is the win came in the spring. All the others were summer ledge tournaments or fall events. Instead, Rose stayed shallow at Guntersville and held off a hard-charging Bryan Thrift for the win.

Rose is now ranked 63rd overall, but he’s truly been on the climb. He’s averaged 812.199 in the last 12 months, compared to his 747.267 24-month average (those averages include tournaments at all levels). So Rose has been on a bit of a hot streak and could be primed for a great season.

As for Thrift, he can’t go any higher, as he’s back ranked No. 1 in our sport after his narrow runner-up. Thrift actually has the third-best average of all Major anglers on the TVA lakes, and his 12-month average of 853.373 is only slightly behind Andy Morgan’s staggering 856.712. To put that in perspective, Keith Combs is ranked No. 3, and his 12-month average is 761.104. Thrift and Morgan are simply fishing at different levels than everyone else, right now.

Meanwhile, John Cox and Scott Martin both started the year ranked in the top five. Both also stubbed their toes badly at Guntersville, finishing 135th and 127th, respectively. Needless to say, they both dropped in our rankings, to 12th and 13th, respectively.