News:
You are at:Home»BASS»Strader Wins at KY Lake
By Sean Ostruszka on May 8, 2018 · BASS, Featured, Majors 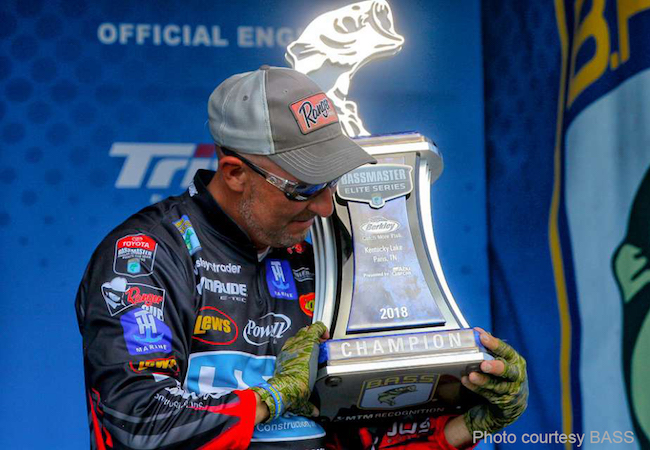 For the first time in more than 15 years, the “Clown Prince of Fishing” again reigns as king.

Wesley Strader has built a 20+-year career on being as consistent as they come. So while he’s cut a lot of checks, wins have been exceptionally rare. His lone Major win had been a FLW Tour event in 2002, and his lone minor victory came 2016 at the BASS Open on the Kissimmee Chain.

A long-time FLW Tour pro, Strader made the jump to the Elite Series this season. He was already having a solid season before the Elites got to Kentucky Lake this past weekend. His season immediately went from solid to great as he took home the crown for his second major victory of his career.

While famed for its ledges, Kentucky lake also has an unreal flipping bite when the water floods the bushes every spring. Strader showcased that (as well as a solid shad spawn pattern) during the derby. He milked the shad spawn on a roadbed and docks with a Zorro Wesley Strader Bango Blade spinnerbait and a PH Custom Lures Strader’s Pooh Crankbait the first three days. Unfortunately, that pattern fell apart on Monday, forcing him to go flipping. That’s when the magic happened, as he quickly flipped up three bigguns in short order on a Reaction Innovations Sweet Beaver to seal the victory.

As for his ranking, as we said, he’s been about as consistent as they come, which obviously bodes well for a ranking. He was already on the verge of the top 20, and now he’s firmly planted in it, sitting in 14th.

We teased that Kevin VanDam had a shot at cracking the top 10 for the first time in 5 years. Well, despite finally breaking his top-10 streak at Kentucky Lake, he still got it done. He’s now officially in 10th.

Then there is Skeet Reese. In finishing runner-up over the weekend, Reese has climbed up to 60th. So, still a far ways away from joining VanDam back in the top 10, but as KVD has just shown, anything is possible.