News:
You are at:Home»Featured»Martens Victorious at Table Rock
By Sean Ostruszka on May 28, 2019 · Featured, Majors 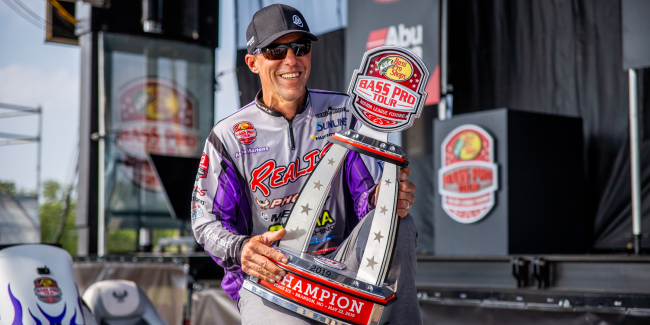 Martens blew away the field at the first BPT event on Table Rock Lake. We say “first,” because Major League Fishing has announced it will be headed back next week to fish the lake all over again due to dangerously high water on Grand Lake; the original site for  stage seven of the tour.

As was little shock to anyone, A-Mart did the majority of his damage with the technique he helped pioneer – a drop-shot. Fishing deep brush piles up the White River, Martens ran cracked more than 70 pounds in the first two periods of the final round thanks to a Roboworm Straight Tail Worm, especially in the second round.

Martens has long been a top-10 angler, and his most recent win further solidified him in the No. 7 spot. Yet, he’s only .06 percentage points away from being in third. That’s how tight (and how well) the top anglers are fishing right now.

Yet, no one is fishing better than Jacob Wheeler. He also got off to a ho-hum start on the BPT, but his top five at Table Rock made three top fives and four top 15s in his last five major-level events. That’s helped him separate himself from second-ranked Edwin Evers, who finally had a mediocre event at Table Rock after what had been a banner start to his BPT career.

Now, let’s see if Martens can do it again in a week and how the entire field adjusts to the same lake in Table Rock, Part 2.