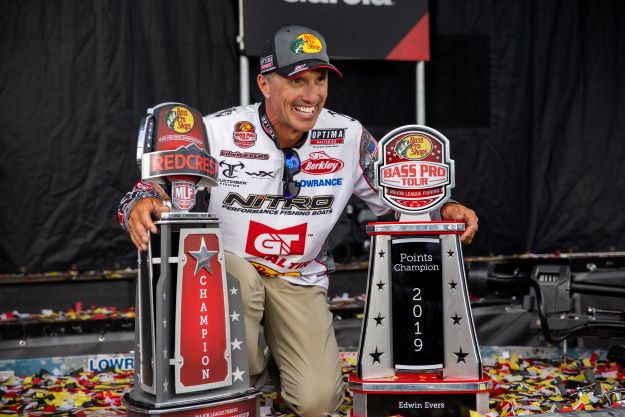 A week ago, Bryan Thrift was cementing his status as arguably the best angler in the sport after finally winning his first title. It seems Edwin Evers wants that title, too.

There is no debate, Evers is fishing better than anyone in the sport right now. Despite the switch to a new tour and format, Evers won Stage Two, was crowned Bass Pro Tour Points champion, and this weekend he then took home the REDCREST trophy on the Mississippi River.

Fishing a backwater with a vibrating jig tipped with a Berkley Powerbait The Deal trailer, Evers had a Period Three to remember, catching 28 fish in 45 minutes. When the third period ended, Evers caught 34 bass for a total of 48-08. That alone would have been enough to claim the win.

Yet, as we said, this weekend was just the culmination of a ridiculous calendar year for Evers. His victory jumped him over Thrift and just behind Jacob Wheeler for the top spot in our two-year Majors Ranking, but he’s behind no one in the one-year ranking. Evers has AVERAGED beating more than 90 percent of the field in any top-level event in the last calendar year. That’s a remarkable feat.

Of course, Wheeler still holds to No. 1 overall ranking because he’s been able to beat 88 percent of the field. Not too shabby, either.

Oh, and let’s not look over Brent Ehrler. He also leapfrogged Thrift and now sits at No. 3 overall in the rankings at his top 10 at REDCREST.

While many eyes were turned to Wisconsin over the weekend, the sport’s eyes have been looking up for awhile thanks to BASS’ two events in the last two weeks on the St. Lawrence and Cayuga Lake.

And speaking of anglers fishing well, Jamie Hartman also has been on fire, winning the Cayuga Lake event for his second Elite Series victory in three events. Meanwhile, it was Micah Frazier who had the most fun up on the seaway (though, it’s hard not to have fun there), besting one of the favorites in Cory Johnston to take home the victory.

Yet, the guy to watch (rankings-wise) has to be Scott Canterbury. The Alabama pro notched third and 11th– place finishes the past two weekends, jumping him from 28th to 17th. He could be cracking the top 10 by the end of the year if he keeps it up.