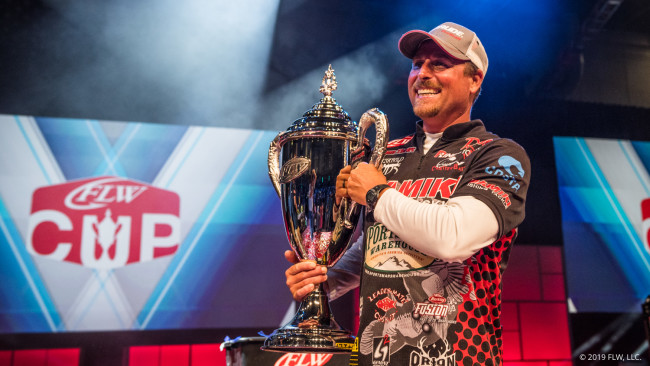 It was only a matter of time, right?

Arguably the best angler in our sport (more on that later), Bryan Thrift had accomplished nearly everything he could with FLW. He’d won two Angler of the Year titles, six tour events, five Costas and set a multitude of records.

Well, that asterisk went away over the weekend at Lake Hamilton, as Thrift went wire-to-wire to win his first championship.

Of course, he did it as only he can, with 20 rods rigged up and a sporadic shallow-deep pattern that somehow always makes sense in his head. On the bank, he caught fish on a buzzbait, plus he landed one keeper on a frog the last day. For schoolers, Thrift fished a small topwater walking bait, a small crankbait and a Damiki Rig Underspin Head with a 4-inch Damiki Armor Shad swimbait. In the brush, Thrift threw topwater, a Texas rig and a drop-shot.

It was a fitting run for the former No. 1-ranked angler in our sport, and obviously, he’s closing back in on the top spot with his championship victory. After slipping to sixth earlier this season thanks to his worst tournament in a decade at Lake Seminole, Thrift is back up to the second spot, behind Jacob Wheeler. If Wheeler slips up even a little, Thrift could be back at the top.

Yet, it’s actually another FLW pro who has quietly climbed up on Thrift’s heels – Scott Martin. The Florida star dropped off his two poor finishes from 2017 in the last two months, and that combined with him beating more than 80% of the field in 11 of his last 13 events (including his top 5 at the Cup) have him all the way up to No. 3, just five points behind Thrift.

There was another top-10 finisher at the Cup who has actually been fishing better than both of them in the last calendar year – Joseph Webster. Webster actually has beaten nearly 86% of the field for the last year, putting him No. 5 in our One Year Majors Ranking.